Last night we drove down to my cousin Margaret's house in New Milford. This is also Natalie's God Mother. We hadn't seen her since Christmas so the kids were very excited to go see her. Margaret found this really neat indoor bouncy place near her house to bring the kids to. We all had a blast! Even Joe got in on the fun with the girls and put on some boxing gloves with them. Check out our fun night!

We sure had a long night last night. The girls went right to sleep. We had fun playing with Margaret's Wii at her house too. I couldn't drag Joe away from the thing. Sorry we kept you up so late last night Margaret! We didn't get home until almost 1 in the morning. And Kaitlyn was missing Margaret very much. Hopefully we can do something again very soon!

Posted by mom2natnkatncj at 11:54 AM 0 comments

It's been just another day in the life of the Barnes household here. Got up at 6 this morning to feed the baby and then dozed off for a little while. Actually got up and out of bed at 7:45 to write invitations for two upcoming birthday girls, make sure everyone was up and getting dressed, and fill out parent/teacher conference forms which I've been putting off. Conferences are next week. Had to leave early today because breakfast was being offered at school for free. Something they do once a month for families. Always nice to not have to worry about feeding the kids before we leave the house. So we left 15 minutes later than I wanted to. Thankfully there was still enough food of what everyone liked left. Ate breakfast and said goodbye to Natalie. Then took care of some PTA stuff with some of the people who were at the breakfast and then it was home to take care of some girl scout stuff. I've only been telling my girl scouts every week for the past month that their cookie money was due last night and yet I had a handful either not show up last night or not bring their cookie money. So phone calls needed to be made because I desperately need to get the money counted and deposited into the account.

So quick stop in the office to check PTA mail and then home we go. I opened an envelope addressed to me in the mailbox thinking it might have been a cookie check from one of my girl scouts. Nope, it's a bill. Little background here. The beginning of this month the 3rd, 4th and 5th graders had CMT's (Connecticut Mastery Tests). I knew that last year snacks were provided for the children and the principal's fund paid for it. Well, I knew it wasn't cheap so I discussed with my officers last month helping defray some of that cost for the snacks. At February's PTA meeting we put that offer out there. Never giving a figure or anything expecting that we'd all kind of price stuff and see what was affordable. We were going to shop at Sam's Club for the stuff ourselves, but last minute the vice principal decided to use the school's lunch service to get the snacks. They never told us a price ahead of time though and then they asked us if we could buy candy to give each child for each day after they finished their tests. So $80 later we have purchased candy for everyone. No questions asked we just did it. So we figure okay well this is going to come off what we were paying for the snacks. Thinking it was going to be around $600 total and our share would have been $300 we said okay so we're going to pay $220. Then this notice from the Vice Principal comes. She has written to whomever the snacks were purchased from breaking down the snacks for each day and what the total comes to and then proceeds to tell this person that they were paying half and the PTA was paying half so they'd get a check for that amount from both of us. Then in hand writing the vice principal is asking me if this is okay. Well, you went and told whoever you bought the snacks from that we were paying this amount and now you are seeking our approval? And no this is not okay! We have not budgeted for this amount of money. This is crazy. So now my treasurer and I need to go have a sit down with the Vice Principal and tell her look it's either going to be the t-shirts for the entire school (whole staff and entire student body) for Field Day in June or it's these snacks. We offered to help defray the cost not to go broke. We need to have some money for start up next year and there is just no more money coming in this year it's all out going at this point. So that should be a fun conversation.

So anyways, I make my phone calls. Thankfully I reached everyone who still owes cookie money. All but one person are giving me their money today. At least I can go through most of it this weekend.

My old kitchen table and chairs sold today from Craig's List. Woohoo! Got $50 for that. Not too bad. Of course the person called me up a few hours later saying the table was wobbly. Thankfully Joe was still home and able to tell her she put the table together wrong and how to do it. So far no more complaints. Hey, she got a used table for $50 she can't expect too much out of it.

I met with someone today from this program called Parents As Teachers. A person from the Family Resource Center at the kids school comes out to the house to give pointers and help on raising your birth to 5 child. And boy do I need all the help I can get with CJ and his weight issues. It was nice to go over a thorough check list of milestones that he should have reached by now. Most of them he has reached. I think he's doing well. I also got pointed in the direction of a pediatrician who might be more capable of listening to my concerns with his weight gain. My PAT person actually went through a lot of this with her own son so it was so nice to be able to sit and talk to someone who completely understands what I'm going through with him right now and trying to get the doctors to listen to me. I've felt so stuck with my own doctor and unsure who else I could go to. It will be nice to have a second opinion on things.

And so this has been my day. I'm exhausted. Joe's at work. I think it's hot dogs for dinner tonight. Something quick and easy. Actually, I'm not feeling much like hot dogs. I have a frozen pizza in the freezer and mac and cheese so maybe pizza for me and mac and cheese for the kids. Hmmmmm, we'll see.

Posted by mom2natnkatncj at 4:59 PM 0 comments

So today is the day my new kitchen table and chairs are to be delivered. We were told yesterday that it would arrive sometime between 2:51 p.m. and 5:51 p.m. They allow you to track the status of delivery online. So don't mind me as I update you on when they are saying my table will be delivered... 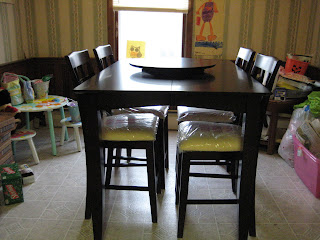 I am so happy to have my new kitchen table. Now to keep the kids from destroying it.

Posted by mom2natnkatncj at 9:22 AM 1 comments

Well, our new kitchen table and chairs are being delivered tomorrow. I got the phone call today with the time of delivery for tomorrow. I was hoping for a nice early delivery, but no such luck. It said they would deliver tomorrow between 2:51 p.m. and 5:51 p.m. What a strange time. Joe will be home tomorrow to receive delivery. Hopefully they come during that earlier time frame. Otherwise we'll have no place to eat dinner tomorrow night. I can see them coming as I'm walking out the door with the girls for our girl scout meeting though. Guess I'll be tracking it all day tomorrow to see when they'll be here. Hopefully there are no problems. I can't wait to have my new table and chairs. We'll be taking the old one apart tonight.

Posted by mom2natnkatncj at 11:04 AM 0 comments

Posted by mom2natnkatncj at 11:41 AM 0 comments

Okay, I'm very new to this blogging thing. I thought I'd give it a try though. My name is Monica and I'm from CT. This blog will be about my life as a wife to my husband Joe of 8 years and mother of my three great kids ranging in age from 9 to 5 months. I stay at home to raise my three children. It's the best job in the world. I never punch out and it doesn't pay any money, but to me the payment of hugs and kisses is priceless. At times it's a very exhausting and trying job and it has very long hours, but I wouldn't give it up for anything.

Posted by mom2natnkatncj at 11:41 PM 1 comments 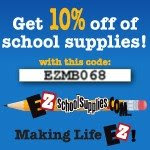